Almost every Deseret Book in Utah has a Lion House Bakery inside – and they make AMAZING rolls! What makes them even better – is they have distributed the recipe to the public! This is their recipe for their rolls – with just a few minor adjustments of my own in the directions. (Their recipe yields 12 rolls, I like to make about 24 out of the batch – they are still huge.) With a little time, they are pretty simple to make – and SO good! Lion House makes orange rolls too – although I’ve never tried them or seen a recipe for them. It sounded good though – so I tried out my own little orange roll version – so good. Here’s the recipe! (See below for a few additional instructions and pictures – if mine aren’t clear enough on the recipe page!) 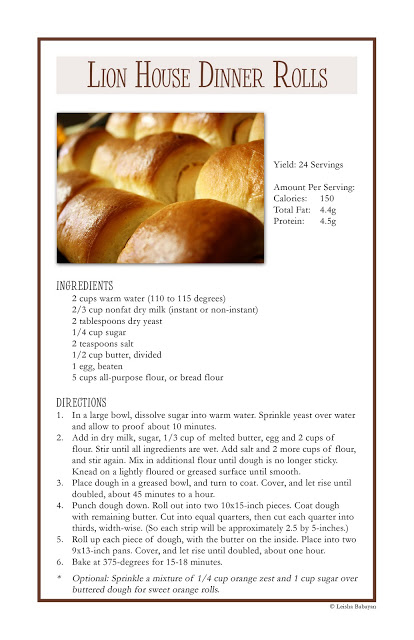 Here’s how I like to make my batch. Make the dough according to the directions, then, after the first rising, roll out half the dough to a rectangle just bigger then your 9×13-inch pan.

Tip: After the first rising – punch down the dough, and let it sit (covered) for about 5-10 minutes. It will loose a lot of its elasticity and be much easier to roll out! I also like to roll my dough out on a greased surface, rather than a floured surface – it will make your dough softer, rather then drying it out more wuth flour. (And it’s easier to clean up!) I usually just give the counter and rolling pin a quick spray of PAM! 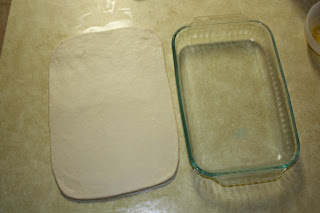 Melt the remaining few tablespoons of your stick of butter from the recipe, and spread out just enough to coat the surface of your dough.

Using a lightly greased pizza cutter, cut your dough into equal quarters, then each quarter into thirds, like this: 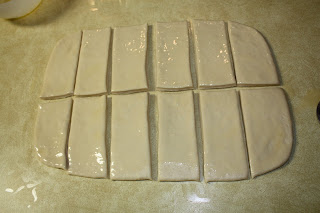 Then, take each piece and roll it up like a cinnamon roll, with the butter inside. Place side down in your greased 9×13 pan with the “tail” of the dough facing down, like this: 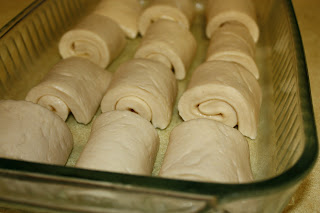 Now, the good stuff… sweet orange rolls. Take your other half of the dough, and roll it out into the same size rectangle. This time, after buttering the dough up like before, sprinkle a 1 cup sugar and 1/4 cup orange zest onto the dough. Make sure you mix the sugar and orange together just before putting it on your rolls – it will crystallize very quickly! 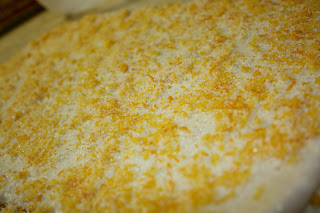 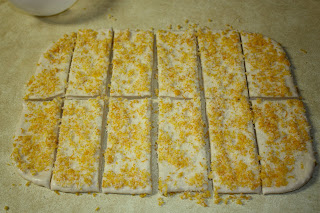 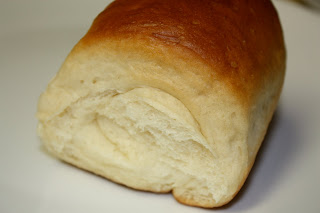